As promised, last week was more exciting than the one before. After Sunday’s regatta, I felt a bit drained and exhausted, primarily due to the hot weather. My car’s thermometer said that it was 38 degrees celsius in the afternoon and my first race was at noon. I should not complain about the heat though because temperatures have already started to drop and we’ve either had strong winds or rain almost every day since. A few weeks ago, I told Herbert that for the first time in my life, I was actually looking forward to fall and winter, but I might have to revise my statement. I am freezing already. Yesterday, we were invited to my second cousin’s wedding in the Lower Austrian countryside it it was only a little bit over 10 degrees celsius. Brrrrrrr. At least there is light at the end of the tunnel because we’re going to South America in February, but until then exhausting workouts will have to keep me warm. Haha.

I felt a little bit unsure about my single’s rig, so I decided to start the week off on Monday with a workout on the water instead of the stationary bike. I hadn’t quite recovered from our recovery week yet (I only just learned that recovery weeks are actually more exhausting than “regular” weeks), so I was very thankful for another steady-state workout before having to do more intense training sessions again. In any case, I felt more comfortable in my boat than at the regatta on Sunday, but was still a bit unhappy about the oarlock hight, which, as I’ve mentioned in a previous post, is already at the lowest possible setting. I should probably email the manufacturer if there is anything I can do to make it lower. I know you can use washers or wedges, but it is probably not the best option. For some reason, I never noticed that my hands were so uncomfortably high, but perhaps none of the boats I used to row with were rigged as nicely as our Schweinehund.

On Tuesday, we were supposed to row in the double, but since it was such a warm day, the Old Danube was full of swimmers and recreational boaters. I have to admit we were quite upset because we’d been looking forward to more workouts in the boat, but there was nothing we could do, so we decided to switch Tuesday’s and Friday’s workouts. We ended up doing three times 15 minutes aerobic, 10 minutes intensive aerobic/anaerobic intervals on the erg. It would be an exaggeration to say I enjoyed the workout because the erg and I are not best friends, but I survived my longest indoor rowing workout in a long time, so I shouldn’t complain. It is just a bit hard not to get frustrated because my average 500 meter times are the same on the erg and in the boat, which is a bit unusual, I guess. Max thinks my strokes on the erg need to be more dynamic, and that we need to work on my legs being more explosive at the catch, and he’s probably right.

On Wednesday,  I would have had a rest day, but decided to do a relaxing 45 minute workout on the stationary bike. Unless I do a really exhausting workout, like the one we usually do on Saturdays, I feel a bit restless when I don’t exercise every day. I keep telling people I get “rocket legs,” legs that are itching to work out, but most people think I’m weird.

On Thursday, I had the pleasure of doing a personal training session with Max at the Crosszone. The focus, as usual, was on my weight training technique, and it was a lot of fun. But when you train with Max, the fun is generally short-lived because his workouts are very hard. I didn’t feel great from the beginning, but after a few erg-deadlift intervals, I got really dizzy and had to concentrate so hard not to throw up. Somehow, I survived, but, of course, I wasn’t happy with my performance at all. At least I was able to do 60 hollow rocks, my “reward” for finishing the torturous part of the workout, quite easily.

On Friday, it was finally possible to do the workout in the double that was originally scheduled for Tuesday. We were very grateful that our club coach, Stephen, was able to do technique drills with us because we felt a bit discouraged after the regatta and thought it might not be a bad idea to spend a few sessions working on synchronizing our strokes. We primarily worked on a clean finish, as well as an exact handle movement during recovery. It also seems like I tend to “knit,” meaning that I don’t always keep my left hand over the right one, which I am hoping to avoid in the future. In addition to a lot of square blade rowing, we also did “arms away” pause drills and starting the stroke from the release position. All in all, we really enjoyed the workout and saw a lot of improvements that we can build on in the future.

To round off the training week, I did the usual eight rounds of erg-weights intervals on Saturday. Even though my 500m erg splits are still not great, I felt much stronger than in the previous weeks. I was especially proud that I was able to do kettlebell swings with a 12kg kettlebell. I guess it pays off working on my technique with Max every other week. I finished the workout with two rounds of 20/10 second core strength tabata. Of course, I was extremely exhausted for the rest of the day and even almost fell asleep in church at my second cousin’s wedding. In addition to being really tired, I was also starving and couldn’t wait for mass being over so I could finally get something to eat. Frustratingly, there’s a tradition of the bride and groom doing lots of games, making fire, cutting logs, and the like, before the reception. I will definitely keep some food in the glove box in the future.

Food-wise, I am trying to eat more whole foods and less meat-replacement products. I usually don’t eat highly processed faux-meat, but I really enjoy tofu, tempeh and seitan. Especially seitan plays an important role in our diet because Herbert doesn’t like most vegan protein sources, especially beans and lentils. I try to eat them for lunch when he’s not home, but for dinner, my options are often limited. Our kitchen storage is quite limited as well, so whenever I want to make beans, I need to plan ahead and soak them the night before, which I often forget. Last week though, I managed to make chickpea curry, kidney bean burger patties, a ying-yang bean kale salad and hummus, which all turned out great. I also started baking bread again. Since it was a fairly spontaneous decision, I didn’t want to use a recipe that takes a day or two, but thankfully found a fabulous Minimalist Baker recipe where you only have to let the dough rise for four hours. Herbert and I really liked the bread, so I will try to bake my own bread more often from now on. It would be a shame not to use my natural granite stone grain mill more often than I do at the moment. I know, I am quite spoiled with my kitchen appliances.

I am also trying to eat a lot of fresh produce from our garden before the growing season is over. This year, I am hoping to get home-grown food at least until the beginning of winter because we now have a small greenhouse, but I can always eat a crisp kale salad. Mmmhhh. After listening to the No Meat Athlete Podcast, I tried a few new dressings, including one based on tahini. Currently, I like kale salad with different kinds of beans, sweet potatos or beets and nuts and seeds. My sprouting station is also very much in use at the moment. Lately, I have been on a general nut kick. I love bread with cashew butter and crave it almost every day. If it only was a bit cheaper. I also enjoy snacking on walnuts from our garden. Sadly, one batch is full of moths and I probably have to throw it out. Herbert is already a bit frustrated because he keeps finding “nature,” worms, moths, caterpillars, aphids and earwigs, for example, in the kitchen, but I try to catch them before he gets a chance to complain about them. At least I know my food is truly organic!

Beautiful sunset at the Old Danube. 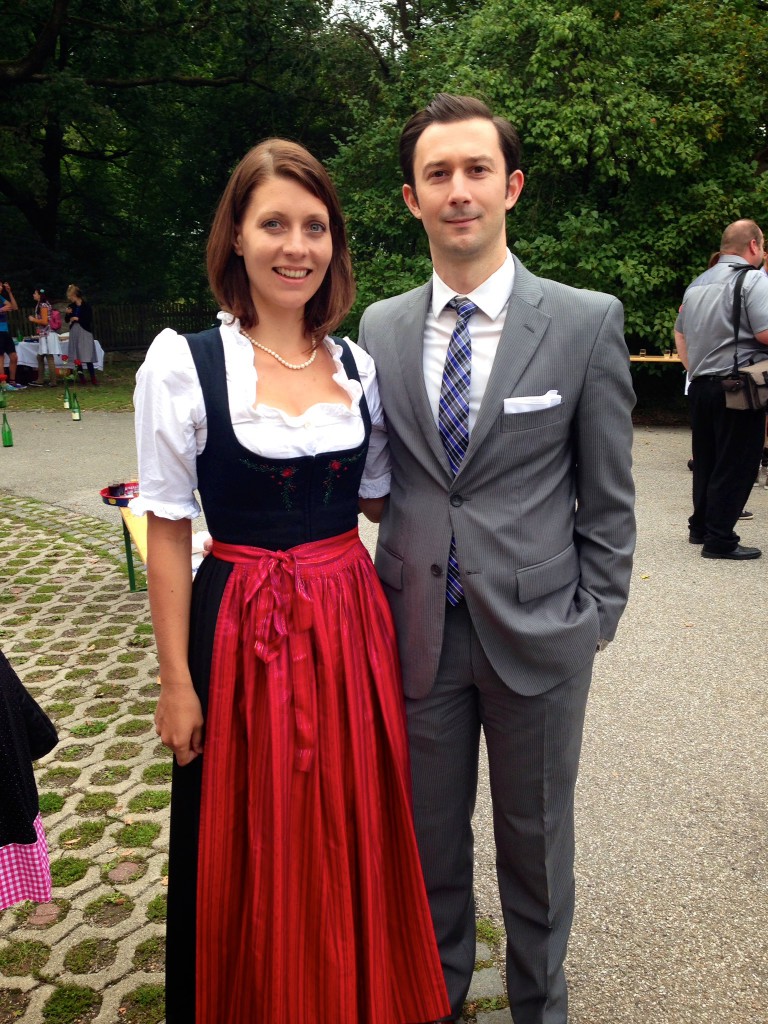 Herbert and I at my second cousin’s wedding. 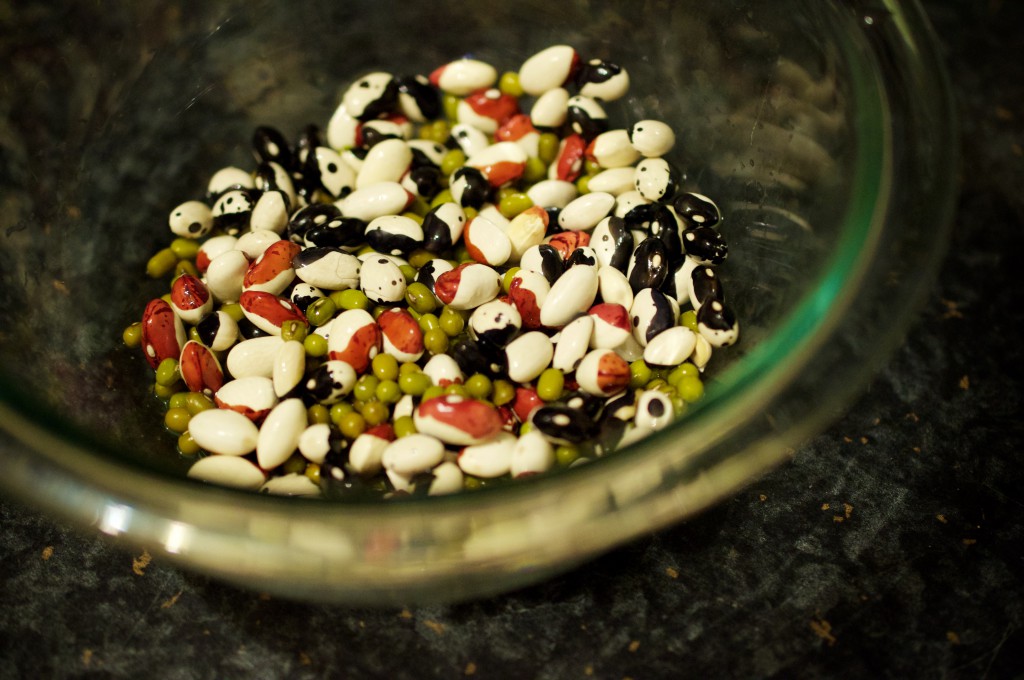 Cows on a pasture beans. 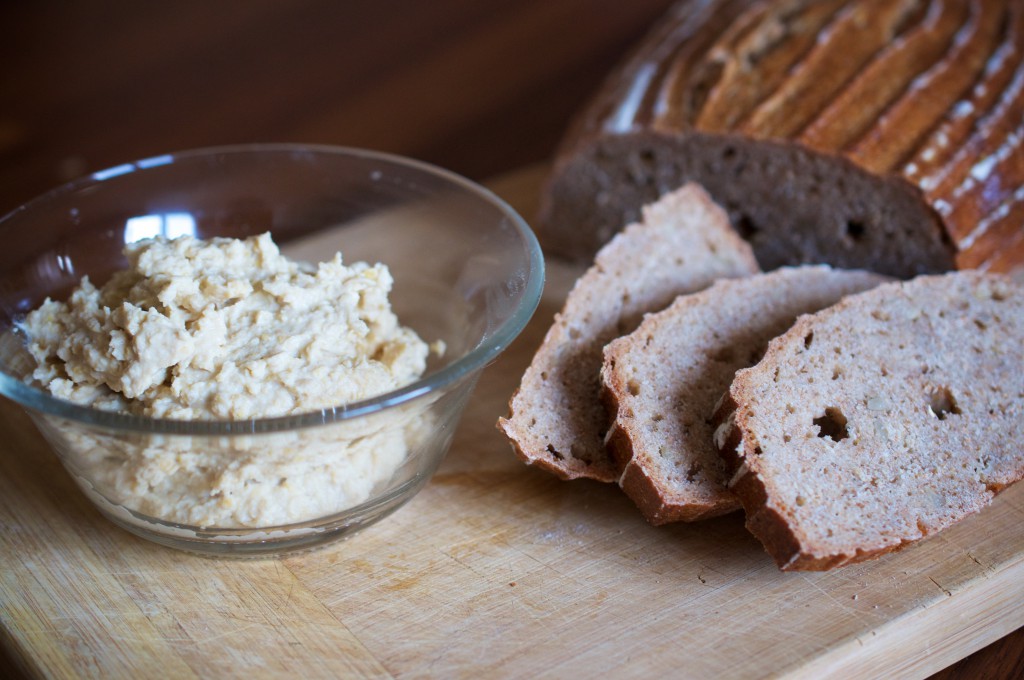