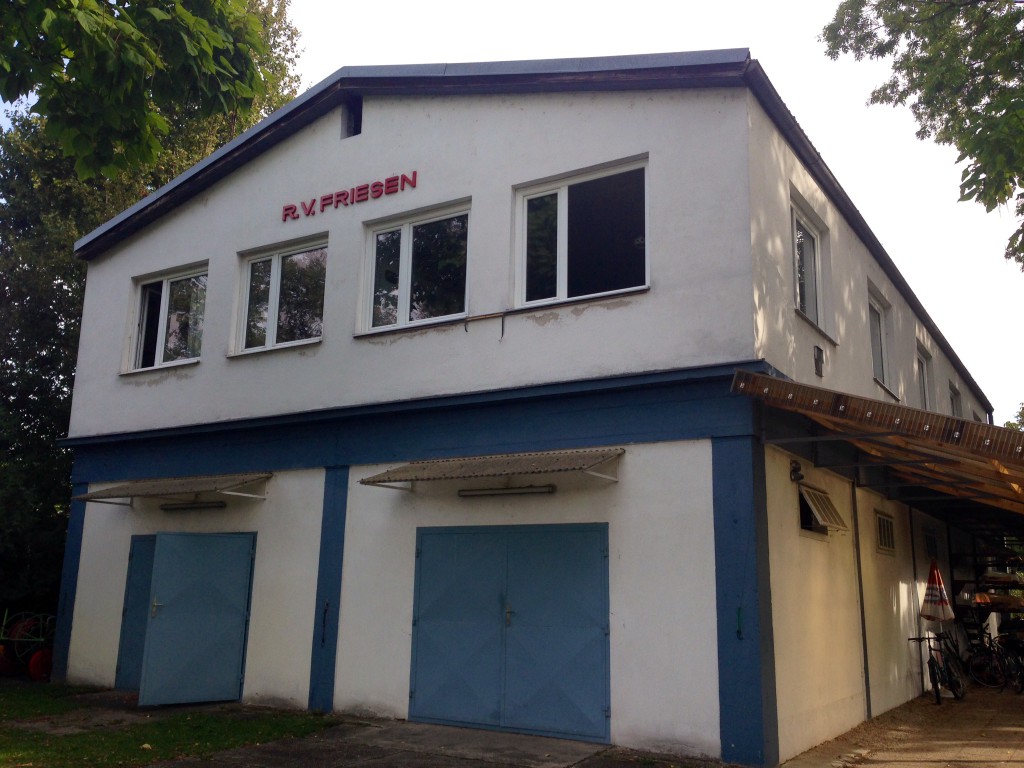 On Monday, it was raining on and off the whole day until I got to the club at around 6pm. I was already in the erg room when I looked outside and decided that it was worth trying to do the workout in the single. As I have to compete in both the lightweight and the heavyweight single scull races at the upcoming Viennese Championships, I thought it would be a good idea to get a few more kilometers in the boat. The erg and I are also not best friends. After the warm-up, I noticed very quickly that the boat was really stable during recovery in spite of a little bit of wind. It is very nice to see that our hard work is paying off, as we’ve done a lot of different technique drills to practice an exact handle movement and a clean finish. Sadly, the “nicer” weather didn’t last very long and rain started pouring down right before I was supposed to do my second 10-minute moderate intensity anaerobic threshold interval. The water was nice and flat, but I could barely feather the blades and was getting a bit cold as the wind increased. When I was doing the third interval, the rain had stopped, but I had nasty algae caught in my fin that I had to row so much harder with my strokeside oar in order to avoid making an unwelcome excursion into the reed belt. I did enjoy the workout though, especially because I feel like my back is getting really strong and becoming more stable at the catch.

On Tuesday, there was a mix-up on our workout plan, meaning that last week’s workout wasn’t deleted and a new one was added, so I was given a choice to do either one. Since I didn’t have a lot of time, I opted for the crossfit workout instead of a longer session with intervals in the single. As a warm-up and cool-down, I did 15 minutes each on the erg and roughly 30 minutes of strength exercises. Most of them were five rounds of two alternating exercises: back squats and jump squats, dead lifts and push ups, and band pull aparts and hollow rocks. Since Tina usually works out with Max at the Crosszone on Tuesdays, I had to do the workout on my own, which was quite boring, I think, especially since I am not the biggest fan of strength training. I always need someone to cheer me on, which is why I do enjoy my personal trainings with Max and the torturous Saturday workouts with Tina.

Wednesday would have been my rest day, but since it was nice and sunny outside, I decided to go on a bike ride with Herbert. Even though we had agreed on keeping our heart rate below 130, we were still going faster than we used to at a regular pace and steady-state pulse only a few months ago. It is always great to see improvements. When we lived in Canada, we went on bike rides really frequently, but I definitely didn’t feel as physically strong as I do now. We rode for about an hour this time, but towards the end, I noticed how tired my legs already were, so I guess they would have needed a day off. Oh well…

Thursday was one of those days where everything just goes wrong. I don’t want to go into detail, but in the evening, it was quite windy and after rowing 180 meters, we decided it was no use trying to do our workout (100x400m intervals) in the boat. In addition to loosing valuable time, our boat was also full of plants and dirt, so we had to spend even more time cleaning. Since we were really exhausted and tired, we weren’t even able to do a proper workout on the erg. If I remember correctly, I did 30 minutes on the erg, followed by one round of strength exercises. All in all, it was quite frustrating.

Based on how we had felt on Thursday, we were very anxious to do Friday‘s workout: the 10x400m intervals that were planned for Thursday. We were still a bit tired, but were surprised (and proud) that we managed to do all ten intervals. Sometimes, you just have to convince your brain that you can do one more and then another one. Thankfully, I have really started enjoying intervals. I think they are the most fun when you start getting stronger towards the end. Very often, the first and last couple of intervals are my best, but it is always very interesting to see how your performance changes.

The weekend was reserved for practice in bigger boats, the quadruple scull and the eight, in preparation for the upcoming Viennese- and  Club Championships. On Saturday, our workout in the quad was better than expected, even though I was not quite happy with the rigging at my bow seat, especially the overlap and the oarlock height. The club has owned the boat since 2009 and I had never not felt comfortable in the boat prior to this workout, so my theory is that our double’s rigging is so perfect that all oder boats can’t compete now. Especially considering that we hadn’t rowed in the quad since the spring, Stephen and the crew were quite excited how stable the boat was and how nicely it was able to glide through the water. As usual, we first did a few technique drills to work on synchronisation and then practiced a few starts and hard strokes. It is definitely nice to mix things up and train in bigger boats once in a while, especially if all rowers work fairly well together even if a boat class is not practiced very often.

I have never rowed in sweep boats very frequently, at first because our coach didn’t want us to ruin our backs when we were younger and then because I didn’t enjoy it very much, probably because of a lack of practice. Interestingly, we’ve had quite a bit of success whenever we’ve competed in the coxless four or the eight though. For instance, we were Viennese champions in the women’s eight in 2008 and regularly qualified for the A-finals in the coxless four at the Austrian Club Championships. I have also taken part in several “fun” competitions in the eight, for instance the “Blue Ribbon of the Wörthersee” (Blaues Band vom Wörthersee), a 16km race across a lake in Carynthia, three times, I believe, and the Viennese Night Row, a floodlight sprint regatta, twice. This year, our coach decided that it would be great to once again compete in the Viennese Championships, so we met up very early for a practice in the women’s eight on Sunday morning. Even though I am still not a big fan of sweeping, I enjoyed the workout more than previous ones in the eight because I think my back is getting much stronger with all the crossfit we are doing. Similar to Saturday’s workout, we also did a few technique drills and then practiced starts and hard strokes. Unfortunately, towards the end of the practice, I was getting really exhausted, so I didn’t know how to survive all the intervals. I am definitely hoping to get a little bit more sleep this week.

Nutrition-wise, my week wasn’t very interesting, as I was still trying to loose a little bit more weight. It was going really well though until I found out that my race was likely to get cancelled because I was the only one who’d entered. Interestingly, the organizers still seem to be a bit unsure about what to do now, but I’ve lost most of my motivation for dieting. At least I know that if necessary, I can loose quite a bit of weight within a week or two. Since our recovery week has just started, all I can think about is food! I am craving comfort food like my favorite vegan Reuben sandwich or fake Schnitzel with potatos, but I should postpone any binge eating until I know my race is cancelled for sure. For now, I will stick to beans, lentils, vegetables, bananas and a few nuts. Why does food have to taste so good? Haha.