This week was extremely exhausting and challenging. In fact, I am so tired I can barely motivate myself to write this post right now, but I am determined to start posting regularly again, so here we go! We hosted a visitor from New York, a friend who I studied with in Canada, most of the week, so I had to schedule my workouts around our socializing and sightseeing plans. After she left on Thursday, I had to start catching up with a lot of work for university and began having the worst nightmares imaginable. I don’t know if there is a correlation though. Haha. 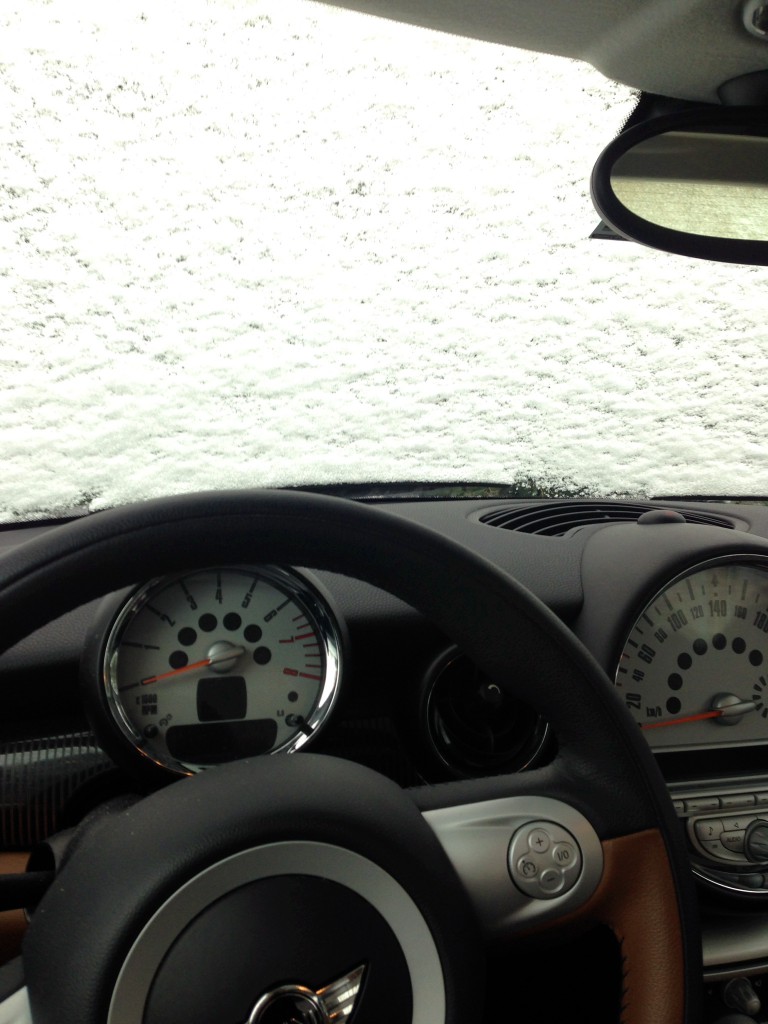 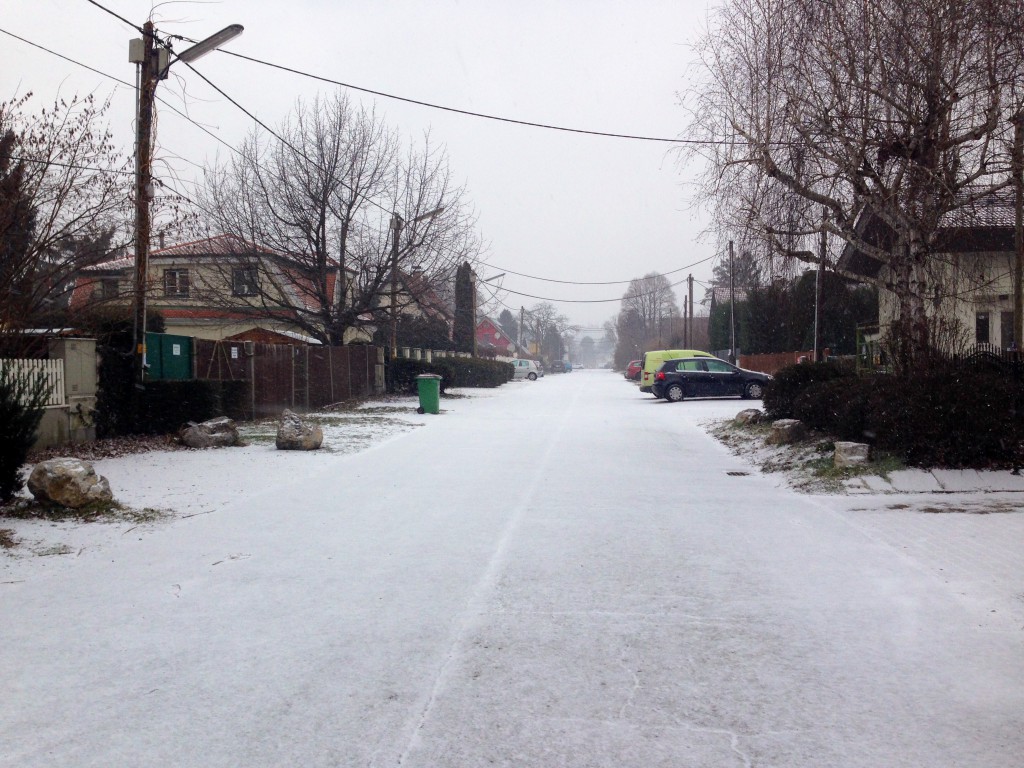 It started snowing on Monday

In addition to two rounds of crossfit exercises, I did eight 300m intervals on the erg, each one followed by 10 burpees and a short 2-minute break on Monday. Sadly, I wasn’t as satisfied as I was the week before because my splits were not as fast and I started having really bad knee pain after the first few intervals. I even had to replace the burpees with deadlifts because my right knee couldn’t take it any more.

On Tuesday, I did a 60-minute steady state workout on the erg. I am slowly getting used to doing longer workouts on the erg, but it is still a bit of a challenge for my back to stay strong and my stroke to stay dynamic for a whole hour. Because of my knee pain, I decided to set up a sliding erg, which is easier on my knees, but challenges my back muscles a bit more. It always is a compromise, isn’t it?

On Wednesday, I decided to finally rest and spend some quality time with my husband, who had the day off because of Epiphany.

On Thursday, I did another 60-minute workout on the erg, which, however, was a bit more intense than Tuesday’s workout because I had to do three 5-minute lactate threshold intervals.

Friday‘s workout was really challenging because for the second time this week, I had to do what I usually simply refer to as “torture,” a combination of intervals at maximum consistent speed and crossfit exercises. This time, I had to do eight times 400m intervals, high jumps and renegade rows. I was quite satisfied with my splits and almost threw up after the last interval, which was the best one in a long time. You really have to learn to fight (your inner pig dog. haha) if you want to survive a workout like that. It is all in your head! It isn’t getting much easier though even if you do it once or twice a week, but I guess it would be boring if it wasn’t challenging.

I took another day off on Saturday because I hadn’t taken one off at the beginning of the week and was too exhausted to even move for most of the day. I spent a relaxing day downtown with Herbert and we had coffee at a small coffee shop and a late lunch at a Sri Lankan restaurant.

Today, Sunday, Herbert trained with his group in the morning, so I came along and did a relaxing steady state workout on the indoor bike. I am so glad I joined them because otherwise, I would have had such a hard time forcing myself to work out later in the day. Because of my exhaustion, I was really looking forward to next week, which we thought was going to be a recovery week. However, somehow our workout plan doesn’t reflect that, perhaps because the Austrian Indoor Championships are coming up in two weeks. I guess what doesn’t kill you makes you stronger. Haha.

One of my New Year’s goals was to try experimenting a bit more with new recipes and foods. Today, I made spicy chickpea burgers from The Blender Girl cookbook and both Herbert and I really enjoyed them. The dough stuck together very nicely, which sadly isn’t always the case with vegan burger patty recipes, and was seasoned very nicely. It was spicy, but there were hints of all sorts of other flavors as well. I am still sprouting regularly, and really wish I had more sprouting jars. Since I have been craving salad lately, I have regularly had salad greens, as well as carrot salad. Mmmmhhh. On Tuesday, Herbert made me a delicious green salad with a mustard vinaigrette, topped with beets, roasted sweet potatos and falafel. 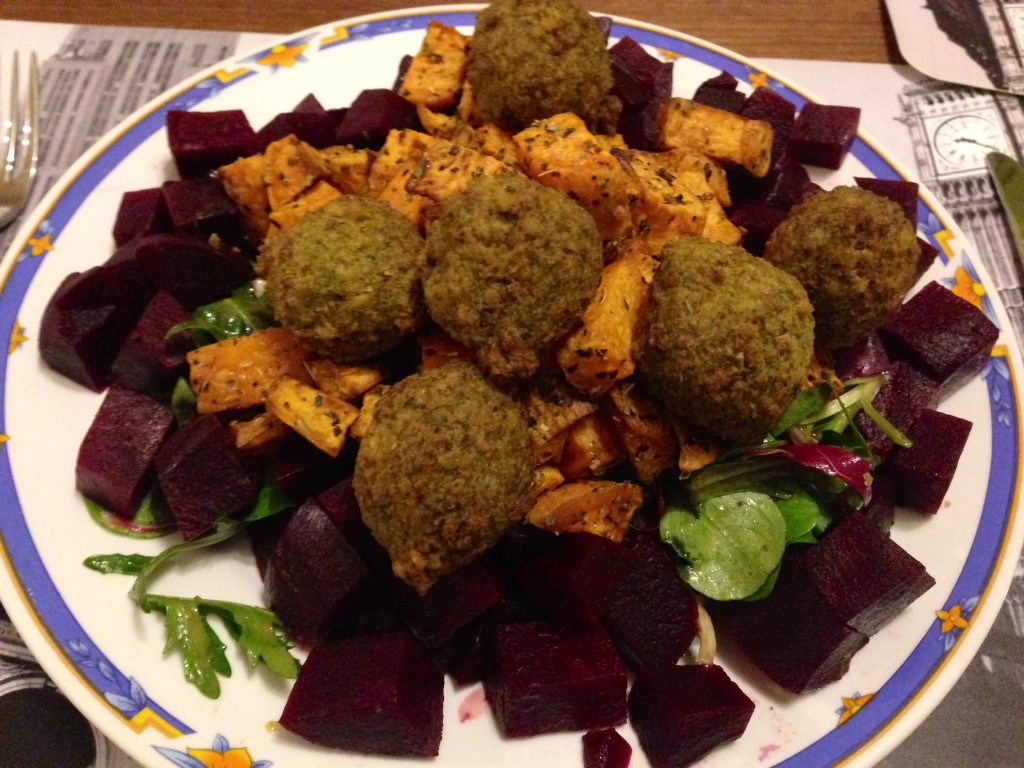 The delicious salad Herbert made for me

I started my first nutrition challenge of the year, 21 days without refined sugar, on Friday. I was planning on doing it a bit later because we were supposed to visit my in-laws on Sunday, but they had to cancel, so I decided to not put it off any longer. It has been quite hard because whenever I am really exhausted, I am always craving sugar and chocolate (in addition to popcorn. haha.). I know there is a lot of vegan chocolate that either doesn’t contain any sugar at all or raw cane sugar, but I also wanted to reduce my consumption of sweets, so I only bought a selection of fruits. Since stores are closed on Sundays, I have been quite grumpy all day because I haven’t been able to satisfy my cravings. I think it is quite normal to sometimes feel like that though when you are on a detox diet. I am planning on writing a separate post on how my challenge is going and why I decided to do it in the first place very soon.