I am so sorry this post is late (once again) and there have been no other post than my week in review ones. We are leaving for Brazil on Friday and I have been incredibly stressed out preparing for the trip. Herbert was on a business trip in Copenhagen for a couple of days so I was in charge of doing laundry, buying snacks, calling the airline because we weren’t able to enter our passport data, and so on. The fact that we’re going on vacation for a bit more than two weeks and internet is extremely expensive (and can be really slow) on the ship also means that I might not be able to post again before the beginning of March. I will try to keep you updated though.

It has become a sort of tradition to start off the week with a “relaxing” steady-state workout on my indoor bike. This week, on Monday, I did 60 minutes, which is basically as long as I can stay in the saddle at the moment. In the summer, when it is nice outside and I go for rides more often, of course I can cycle longer, but your butt certainly has to get used to it. I usually entertain myself with an episode of a TV show on Netflix or a podcast. Otherwise, the rides would be incredibly boring.

When Max is your coach, very few workouts are actually “relaxing” so  it was time for another “torture” workout on Tuesday. After a 15-minute warm-up on the erg, I did five rounds of 500 meters on the erg, followed by 10 burpees and 10 goblet squats. It was extremely challenging and I felt like throwing up the whole time because I was quite exhausted. However, I was very happy with my splits of around 2:00, which is around 10 seconds faster than at the end of last year. You really learn to suffer. Haha. I finished the workout with two rounds of tabata, plank and hollow rocks.

On Wednesday, I took the day off even though we didn’t have our dance classes that evening. We had a friend over instead and thoroughly enjoyed dinner and drinks.

On Thursday, I went for a 60-minute steady-state run and it was extremely exhausting. Sometimes, you check your watch how long you’ve been running and you get really frustrated because not much time has passed. It certainly was one of those days. It didn’t even help that I was listening to one of my favorite podcasts.

On Friday, I had to endure another “torture” workout, which was even more exhausting than the one I had to do on Tuesday, and my muscles were sore for days afterwards, especially in the shoulder area. After a 15-minute warm-up on the erg, I had to do 10 intervals of 250 meters on the erg, followed by 6 cleans and 3 high jumps in under 2 minutes per interval. Since I am fairly new to weight lifting, I still have to focus on a correct technique, so I wasn’t always able to do the cleans as quickly as I should have. Since I was quite exhausted after the intervals, I decided to finish the session with a 10-minute cool-down on the erg instead of three rounds of core exercises, which I added to Sunday’s workout instead.

My mother celebrated her birthday on Saturday, so I decided to take the day off. I was so exhausted from Friday’s “torture” workout that I think I must have eaten four or five cupcakes…. and cookies. Haha. Max says we need to eat, which is a really good excuse for binge eating all the time.

I concluded the week with a crossfit workout on Sunday. As a warm-up, I spent 15 long minutes on the erg, which was quite exhausting because my muscles were still sore. Afterwards, I did three times 20 squats and three times 20 deadlifts. I especially enjoyed doing squats because the bar massaged my tense spots in my neck and shoulder area very nicely and my muscles were actually less sore after the workout than they were before. I finished the session with five sets of 10 bar rows, 10 push ups and 30 russian twists, as well as core exercises. I must say I’ve really started enjoying lifting weights lately and am excited to see improvements, both on the erg and in the weight room. 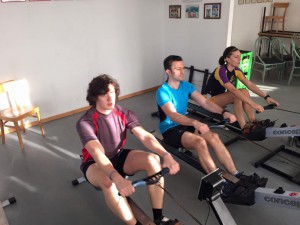