In case you haven’t already noticed, I am a huge fan of sprouts. I love how fresh they taste and how easy it is to grow them at home. Since I have cats who enjoy eating and digging out plants, my options for growing my own food is quite limited. Sprouts, however, are great because you can grow them indoors all year around, even if nothing else thrives. Of course, they grow much faster in the summer, but isn’t it wonderful being able to harvest fresh greens even when it is snowing outside? I’ve been an avid sprouter for almost two years, and I can assure you that there is very little you can do wrong unless you forgot to water or rinse the sprouts at least twice a day. Even if they look moldy, they usually are only really thirsty. I learned this the hard way after throwing out a few batches. I couldn’t believe I always had “mold” on my sprouts no matter how hard I tried, so I searched the internet and found out that it is quite common for root “hair” to stick out right before the sprouts need to be rinsed, especially if you are growing brassicas. Apparently many people make the mistake though.

Sprouts are also incredibly healthy. According to an article published in the International Journal for Applied Science, “[s]prouts have naturally occurring levels of nutrients higher than any whole food” (Schmid et al. 2007). They are especially rich in antioxidants and health-promoting phytochemicals. Martinez-Villaluenga et al. (2010), for example, found that even if the original seeds didn’t contain vitamin C, germination led to a sharp and gradual increase the levels of the vitamin in broccoli and radish sprouts. The same applied to the level of antioxidants detected in their experiment. Another study by Guo et al. (2012) found that “…the germination of mung bean sprouts significantly increased concentrations of vitamin C, phenolics, and flavonoids, and total antioxidant activity.” Even people who can’t digest beans and lentils well usually have no problem eating sprouts because enzymes break down their nutrients, including proteins. They are so to say already pre-digested. Haha. There has also been a long list of studies (certainly too many to cite here) that confirm the effectiveness of sprouts in the prevention and treatment of a multitude of diseases of civilization, including many types of cancers, diabetes, allergies, Alzheimer’s disease, heart disease and many more. 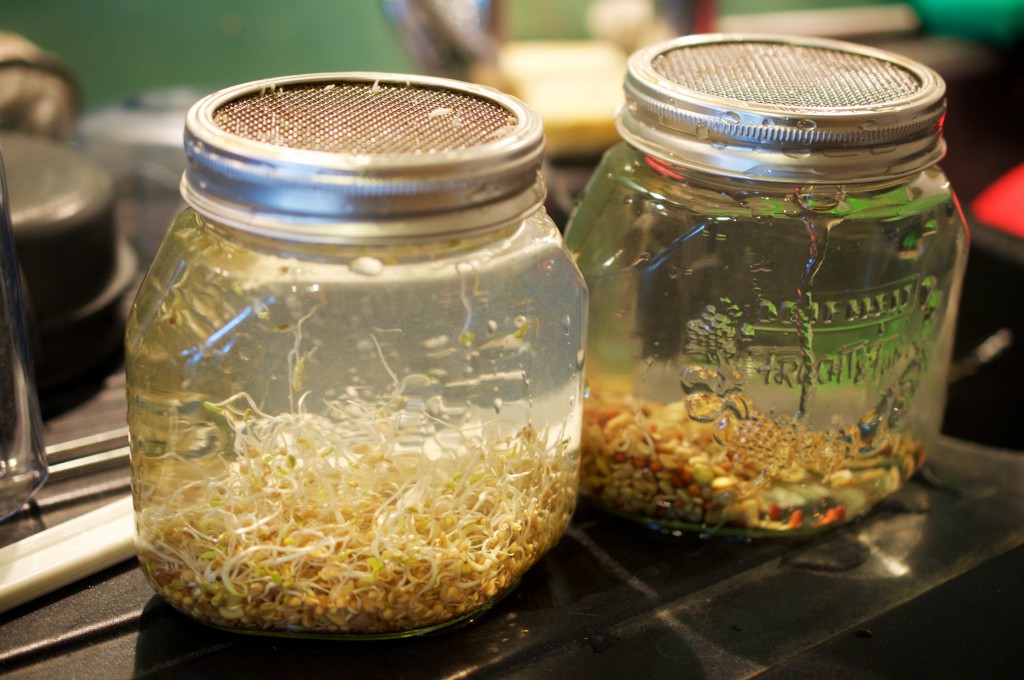 In case you are still not convinced how great sprouting is, let me tell you how easy and cheap it is. I bought a handful of little 100g boxes of sprouts for a few Euros each almost two years ago and I just finished the first one the other week. If you use around two tablespoons of seeds for one batch of sprouts like I do, you won’t have to re-stock very often. Of course you have buy sprouters, but even that investment will pay off. I am sure you can also find tutorials online on how to make your own sprouters from mason jars and other utensils you might already have at home. 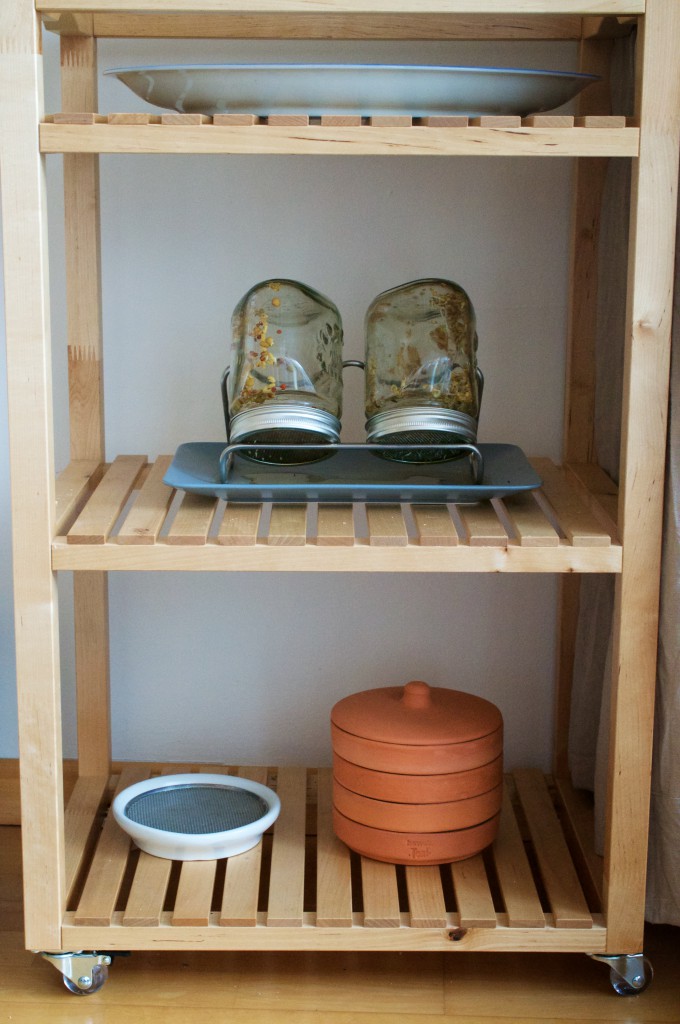 There are my different kinds of sprouters that all have their advantages and disadvantages. I love my mason jar sprouters (Eschenfelder Sprossenglas). Since I try to reduce my exposure to plastic, I really like the fact that it is made of glass. I’ve also had the best results growing sprouts in jars. When it is sunny outside, you can often harvest your sprouts within two days. Jar sprouters work best for lentils, smaller beans, like mung beans, brassicas and alfalfa. Some seeds, like chia, flax, cress and mustard, form a gel-like substance when they’re soaked and thus don’t sprout well (or at all) in a jar. One of the drawbacks I’ve read about is that because of the lack of circulation, mold is likely to grow. However, I’ve been sprouting for quite some time and I’ve never had any problems with real mold, only root “hair,” as mentioned above. As a general rule, soak the seeds overnight, drain the jar in the morning and rinse with fresh water at least twice a day. I usually let the seeds soak for a few minutes in order to avoid root “hair” sticking out. Then you place them upside down on a rack. If possible, put the jars in the dishwasher once you’ve harvested a batch of sprouts.

I also have a sprouting tray (Eschenfelder Kressesieb) made for cress. It is basically a small screen placed on top of a shallow bowl. From my experience, it generally works well with all sprouts that don’t form enormous roots. Occasionally, I use it to sprout wheat for our cats and regret it every single time because the roots grow so fast that they run out of space at the bottom. Within a few days, the roots turn brown and the wheatgrass dies. I also would not recommend it for sprouts that dry out easily.

My terra-cotta clay sprouting tray “tower” (Hawos Sprossen-Toni) is more versatile because you can use it for (almost) all types of sprouts. The clay absorbs water and keeps the seeds “hydrated” throughout most of the day. Ventilation is often listed as one of the primary benefits of clay trays, but I think the holes are a bit small and get clogged very easily. Moreover, some of the trays are always in the dark, which I’ve noticed has a negative impact on productivity. You can either rinse the sprouts at the sink, like I do, or use a spray bottle. I would recommend a clay tray for all gelatinous seeds though, but you might have to clean the little holes with a needle because smaller seeds like to get stuck in there. Unless you are using said gelatinous seeds, pre-soaking is recommended. Don’t forget to rotate the trays so all seeds get some sunlight.

So how do I like to eat my sprouts? I haven’t tried any fancy recipes to be honest. So far, I’ve topped pasta dishes and curries with sprouts, and have used them for sandwiches and salads. Sometimes, I mix sprouts with salad greens, kale for example, but often, I eat them on their own. Mixing bean or lentil sprouts with more “aromatic” ones like radish or mustard has worked very well for me. Most often, I just prepare it with a simple vinaigrette made from pumpkin seed oil or hemp seed oil, apple cider vinegar, and whichever spices I have on hand. You can get really creative with sprouts. I prefer them raw because they’re healthier that way, but you can  also cook them. If you would like to try more “exciting” dishes than I have suggested, check out this website. Happy sprouting! 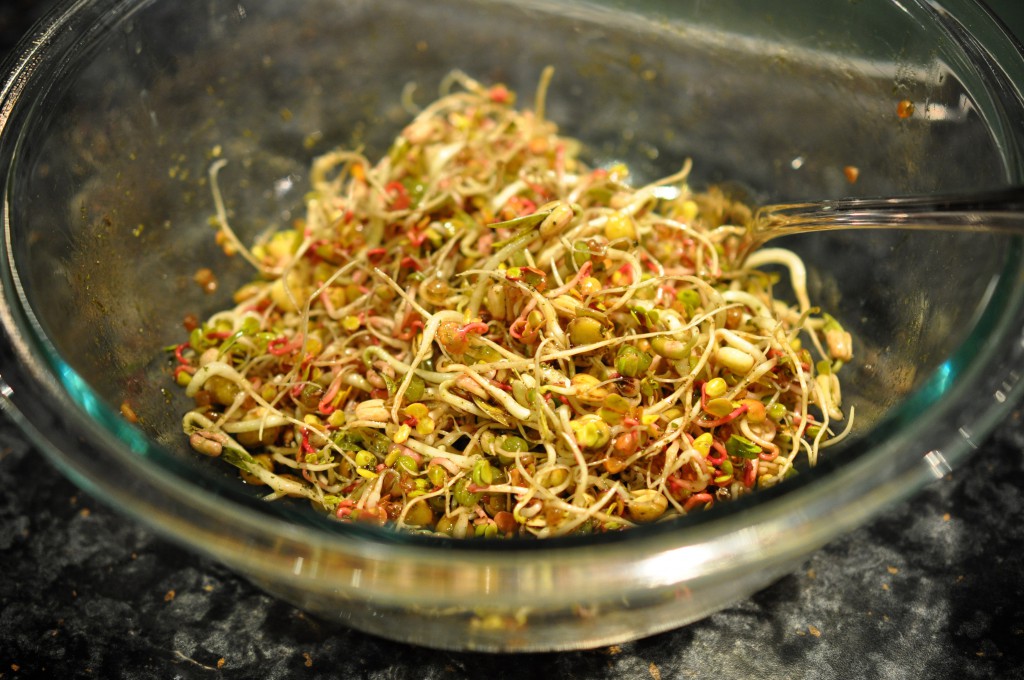 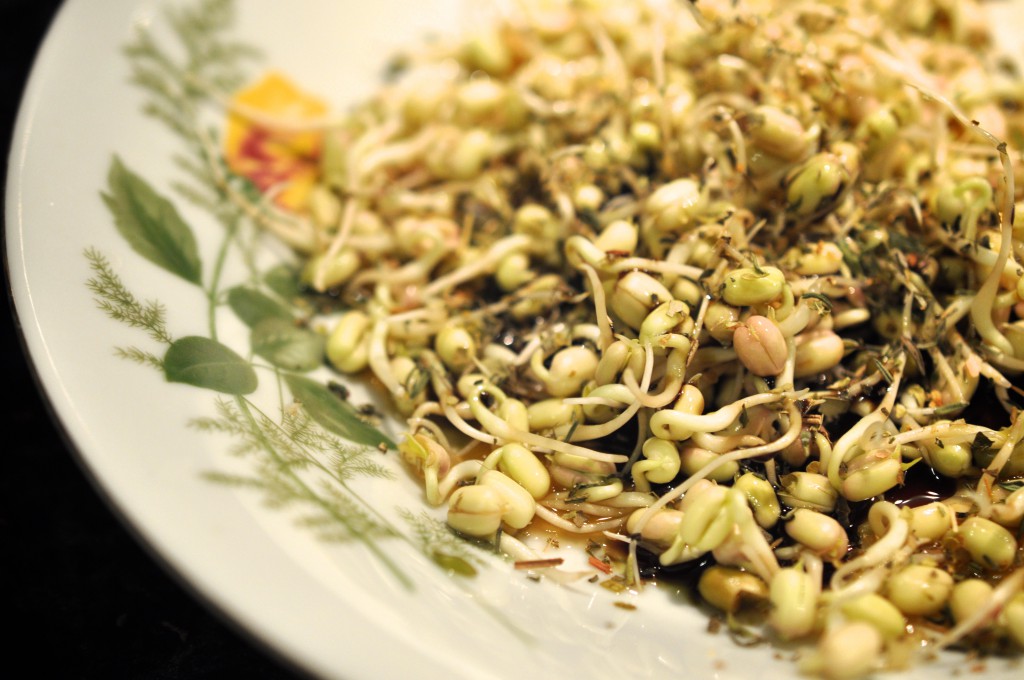