This week was extremely hard and exhausting, primarily because it was supposed to be a recovery week. Since the Austrian indoor championships are taking place next weekend and experience has shown us that we don’t perform particularly well during or right after a recover week, Max has decided to postpone it by two weeks. It looks like I will only take part in one race, the women’s team competition, but Tina will most likely compete in four. Strangely, according to the Concept II indoor rowing rules, you are not eligible for Masters’ races until you are 30 years old. This is different from the regular 27 years for all other competitions, at least as far as I am aware. Since we didn’t find out about this rule until the official invitation was published online a few weeks ago, Tina now has to “replace” me in all Masters’ competitions. Anyway, even though the week was tough and I suffered from terrible headaches, I still feel quite satisfied with my performance, especially in our “torture” workouts.

On Monday, I could have taken the day off, but I was a little bit antsy after spending almost an entire afternoon on public transportation and waiting in line. Therefore, I decided to do a relaxing 60-minute steady state workout on my indoor bike at home. It is always nice being able to catch up with podcasts and shows on Netflix without having to feel guilty.

On Tuesday, I had a personal training session with Max at the Crosszone, which I enjoyed immensely. In addition to working on my weightlifting technique, we also did exercises to improve my leg explosiveness. For instance, I had to sprint while Max was holding me back with a rubber band. Of course, I also had to endure intervals on the erg. I have to say, I am slowly getting used to them. I was really happy to see that I was able to easily do three times 40 kettlebell swings with a 12kg kettlebell without hurting my back. Yay, success!

Because Herbert and I are taking two dance classes, ballroom and salsa, on Wednesday afternoon, I decided to take the day off. Dancing sort of counts as a workout though, right?

On Thursday, it was time for another “torture” workout “light.” I am writing “light” because we actually didn’t have to do any crossfit exercises inbetween our intervals on the erg, only before and afterwards. Most intervals were ok, but the last one was fantastic. It was my fastest one probably in almost 10 years and almost 10 seconds faster than my splits only a couple of months ago. We ended the workout with three rounds of core exercises.

Unfortunately, I didn’t feel very well on Friday, as I was suffering from a migraine after trying too hard to catch up on work for university. Therefore, I decided to do my one hour steady state workout on the my stationary bike at home instead of on the erg at the club. Thankfully, I did feel a bit better right after the workout, but sadly, it didn’t last very long. Therefore, I decided to take Saturday off and postpone that day’s workout by a day.

On Sunday, Herbert usually trains with his team quite early in the morning, so I decided to come along to tick my last workout of the week off the list. Since I still had a headache and felt quite exhausted, I opted to do my “torture” without crossfit exercises between my ten 250m intervals. All in all, I spent an hour on the erg.

I have already written a separate post on how my refined sugar detox is going. You can find it here. Herbert was on a business trip at the beginning of the week, so I didn’t cook anything too exciting on those days. However, I always take the opportunity too cook dishes Herbert doesn’t like, beans, tofu and lentils, for example, when he isn’t home. After my workout with Max on Tuesday, I suddenly started craving my favorite comfort food, vegan Reuben sandwiches, when I was on the subway. Don’t ask me how that happened. I enjoyed it so much that I had it again the next day. After Herbert’s return, I did try a new recipe, mushroom stroganoff from The Blender Girl cookbook. Lastly, I got back into the habit of making a smoothie as often as possible. During the winter months, I am usually not in the mood for a refreshing green smoothie, which is why I have neglected my blender a little bit lately. However, there are a few really nice immune system-boosting smoothie recipes in The Blender Girl, the cookbook I decided to focus on this week. I especially like the beat-the-cold-and-flu blues juice with carrots, apples, lemon, ginger, cinnamon and cayenne pepper. My plan for this week is to write up a post on my favorite smoothie-making resources. Stay tuned!

Since I didn’t take any workout-related pictures this week, I will treat you to a photo of one of our cats, Hattori, enjoying the sunshine. The sun still exists! 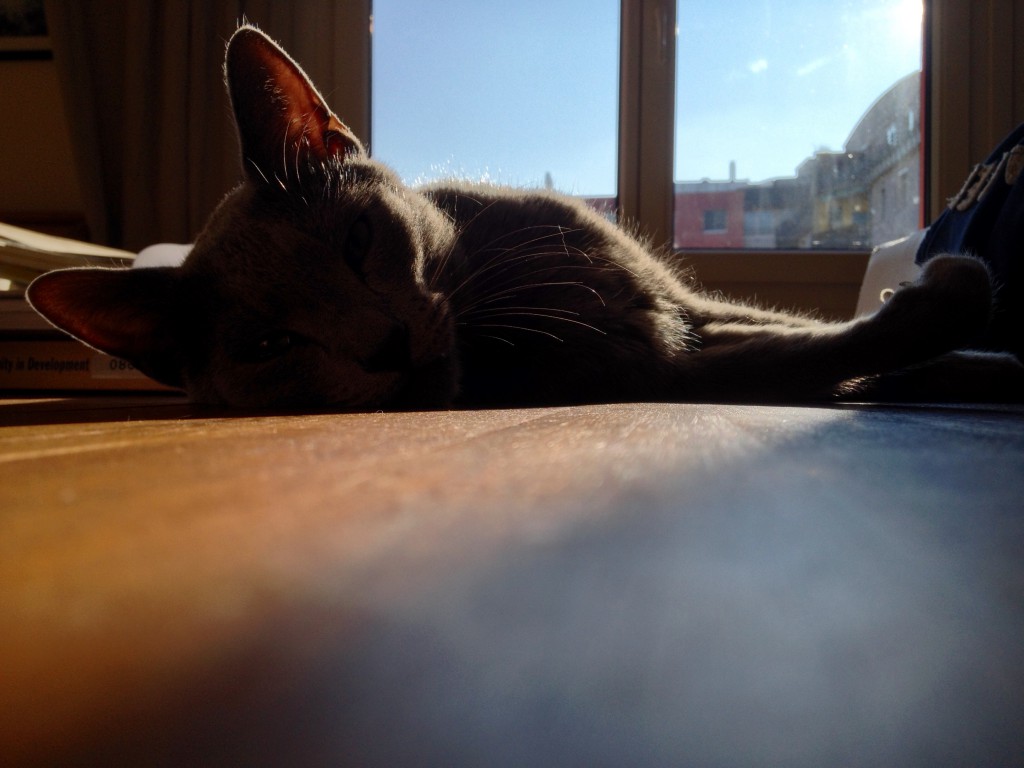